BECOME A SUPPORTER OF OUR SCHOLARSHIP FUND FOR KYAITHANI and LOWER YATTA SECONDARY SCHOOLS IN NDANDINI KENYA
In 2011 we started providing scholarships for the 9 top achievers at the only secondary school in the Ndandini area. In 2019 we have now increased that to 66. There are now 410 desperately poor students at Kyaithani and Lower Yatta Secondary Schools striving to get an education so they can better their lives. Can you help us increase the number of scholarships that we provide?
$300 is the cost for school fees, a uniform and books for a child for a year. We provide a $150 per year scholarship to the top students based on their academic achievement. We are looking for donations in any amount.
Donors to the scholarships will be able to follow our progress on this blogspot as we post information about the children being sponsored, photos and letters.
100% of the donations received go to the students and the Board of Governors accounts to us for the funds. There are no deductions for fundraising or administration.
Like the students and their parents, we know that without an education there is little hope for them to make a better life for themselves.

Unlike in Canada, families in Kenya have to pay school fees and provide uniforms and books in order for their children to attend high school. Many children are forced to drop out because, with family incomes of less than $1/day, their families cannot afford to pay the school costs.

Donations in any amount will receive a tax receipt (for Canadian income tax returns).
CLICK HERE to donate.

We have a proven track record of successful projects in the Ndandini and Kyaithani area since 2007. For more information about all our projects in Ndandini visit www.ndandini.blogspot.com

Watch a YouTube summary of all our work at Ndandini since September 2007 by clicking HERE .
For more information about the scholarship program contact me at TerryUmbach@hotmail.com .

The principal and administration of the Kyaithani Secondary School has presented us with the following list of students that they are recommending be provided with the first scholarships from our scholarship program.  It is very hard to read the reasons for these recommendations and know that there are many more students at the school that also have similar situations.

Kimali, the principal, advises that all these students are very disciplined and industrious and perform well in class.  He says "we are optimistic that the Scholarship Program will give the students the provisions, confidence and impetus to fully exploit their academic potential for personal and social development in the future.  Once again, thanks for making the scholarship program dream come true".

Here is a photo of the 9 students.  From left to right they are:
John, Kelvin, Felistus, Doreen, Maureen, Faith, Sophia, Joshua and Joseph 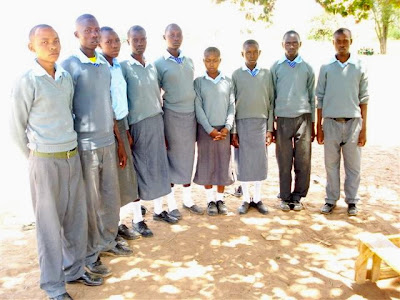 Keep watching this blog for updates.

John  Male, born 04June 1994, in Form 3 with 305/500 grades.  Desparate situation as parents are separated and no one cares for his welfare.  Wants to become an accountant.

Kelvin  Male, born 25Dec 1993, in Form 3 with 345/500 grades.  Desparate situation as parents are separated and the mother cares for him out of casual jobs.  Wants to become an engineer.

Felistus  Female, born 06July 1993, in Form 3 with 289/500 grades. Humble with peasant farming parents and four other children in school.  Wants to become a doctor.

Doreen  Female, in Form 2 with 258/500 grades.  Comes from a large family of 8 children with no regular incomes for the parents.  Wants to become an engineer.

Maureen  Female, born 19Dec 1992, in Form 2 with 286/500 grades.  Desparate situation as the parents have 5 children in school and no formal employment.  Wants to become an engineer.

Sophia  Female, in Form 1 with 323/500 grades.  Desparately poor family and none of the siblings have gone through secondary school.  Wants to become a lecturer.

Joseph  Males, in Form 1 with 286/500 grades.  Is a partial orphan with no prospects for the future.  Wants to become a teacher.

Click on this link to make a donation to our Scholarship Fund to send deserving and needy students from the Ndandini area of Kenya to Kyaithani or Lower Yatta Secondary Schools.

You will receive a tax receipt for use with your Canadian tax return.

Thanks for your help in helping the children to improve their lives. 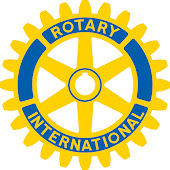 A partnership project of the Rotary Clubs of Sunshine Coast-Sechelt (BC) & Belleville (Ont) and St. Hilda's Anglican church (Sechelt) with the additional support of many individuals. To watch a YouTube summary of all our project work at Ndandini click on the Rotary Logo above.